Fundraisers Drowning in a Sea of Data? All Prospect Information is Not Equal!

What is the value of good data? Our research has shown that gift officer visits with prospective donors can cost up to $2,000 per visit once you factor in salary, benefits, travel time and expenses, and time spent on administrative duties. 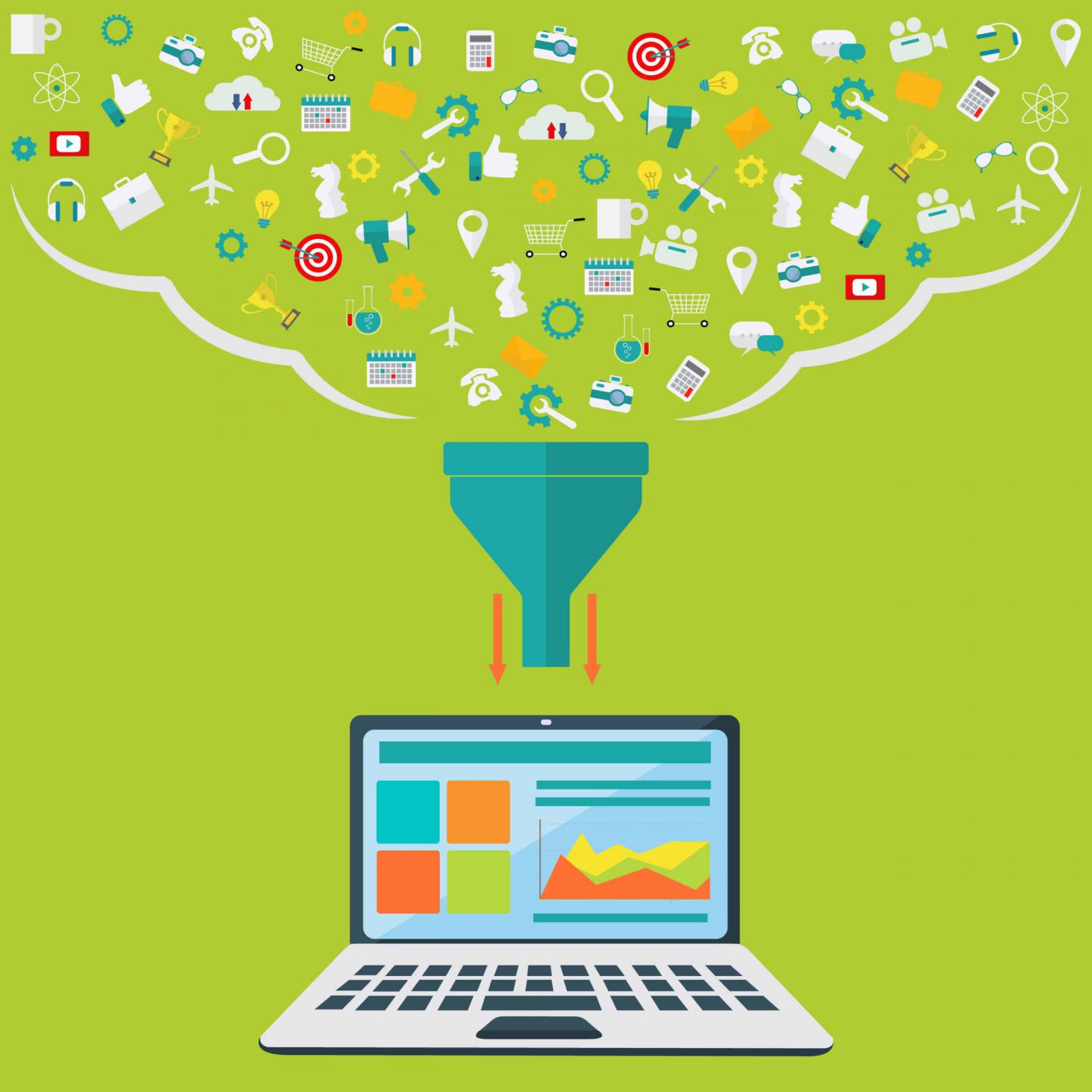 Those costs can really add up if you consider all the staff conducting visits and the number of prospects in fundraisers’ portfolios. Costs per visit rack up even further when advancement staff are working with data that is incomplete, outdated, or off target. While traditional cross-country in-person visits with prospects may change in light of the COVID-19 pandemic, gift officers will still spend hundreds of hours pursuing low-potential prospects and struggling with inaccurate data.

Big data is certainly all the rage, but we believe it is significantly more cost effective to procure the right data rather than gather lots of nominally valuable data, which can lead to wasted time and missed opportunities.

Most institutions and nonprofits have unique processes for how they mine, score, and use donor data. We wanted to hear directly from fundraisers and gift officers about which data points on prospective donors they find most useful, so we designed a short survey. As of writing this post, we still are accepting responses to the survey, but I want to share some of the preliminary data.

One of the biggest challenges in the advancement industry isn’t a lack of information on donor prospects. In fact, it’s the opposite. You could gather and purchase a TON of information on your constituents. But what do you do with that information? How do you best filter, funnel, and organize your data in a way that helps you both identify a prospective donor and understand who they really are? How much data do you really need to be able to identify top prospects for your gift officers’ portfolios or develop meaningful cultivation strategies?

What Advancement Professionals Told Us

To begin to answer the question of how to put data to action, you need to know which data points or fields, and combinations thereof, best help you identify top prospects and build actionable donor profiles. Our survey asked advancement professionals to evaluate and rate  two lists:

We asked the respondents to rank each data point as “Must-Have,” “Would like to have,” or “Neutral/don’t need.” The preliminary results with percentages of votes for each category show the relative value of different indicators:

So, what can we learn from this?

When it comes to a prospect’s inclination to give, fundraisers seem to be most interested in data points that relate to previous gifts the prospect has made to the institution. Let’s not forget that large gifts typically come after years of cultivation and smaller gifts.

We believe one useful way to think about your constituents is in terms of a life cycle. In 2017, we designed a chart that shows how these stages can impact the giving capacity and likelihood of an alumnus to give back to an institution. As you can see, the X-axis tracks the age of the alumni, donor, or prospect. The Y-axis measures their giving capacity and likelihood to give. Notice how the giving habits increase and plateau during different stages in the cycle.

Imagine that you have the following chart for every donor in your CRM: 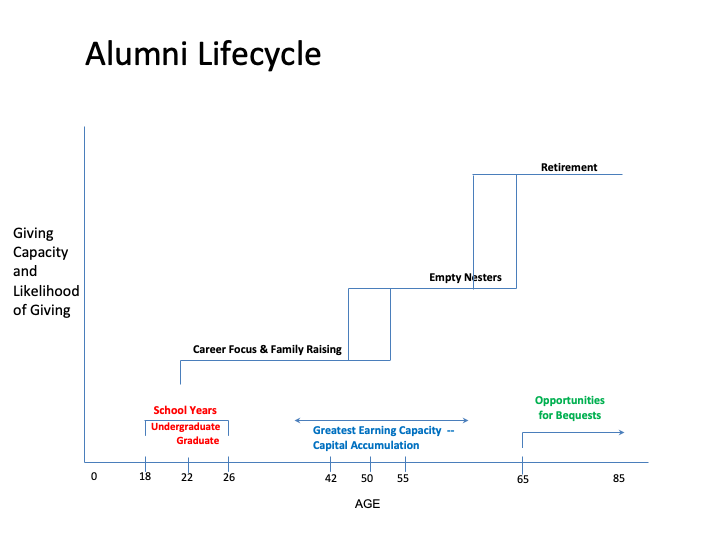 Then, imagine customizing this chart for a specific donor by plotting a) major events in her life and, assuming your records go back this far, b) every gift she made to the institution over the years. A chart for that donor might look like this: 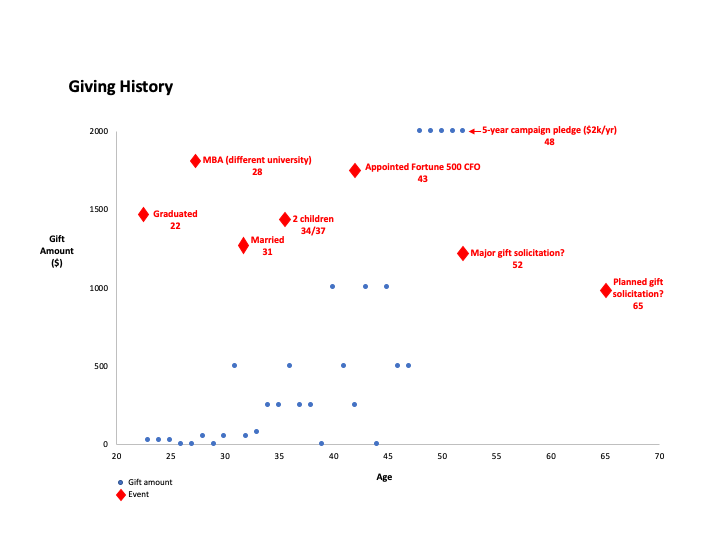 What patterns emerge in this chart that you can use to shape how you cultivate this donor? For example, has the donor been a consistent giver, increasing her gifts as her career and economic status progressed? Can you link the timing and size of her gifts to how and when she engaged with the school? Based on a pattern of major gifts made by similarly situated donors, can you recognize that this donor should be in the pipeline for enhanced cultivation and engagement?

A picture such as this can be worth a thousand words (or a thousand bits of personal data) if the right data is evaluated. Identifying your next major gift prospect is important, as is building the pipeline of future major gift donors!

To us, the potential of this picture raises important questions: how do you find prospects who have never given to the institution? And, if previous giving was sparse or nonexistent, how do you know if a prospect might be inclined to make a major gift? Perhaps this is where relationships really come into play…

We believe one of the most important factors influencing a prospect’s propensity to give is that they have a close, personal relationship with someone at the institution. These relationships may form between a constituent and a dean, faculty member, coach, or even an influential and connected alumni. As one major donor we spoke with explained, “I may never have taken my giving to the next level, made that seven figure gift, if the dean of the engineering department, with whom I had developed a friendship and served as his sounding board, hadn’t asked me personally to take the lead in funding one of his key initiatives. In fact, I would have had a hard time saying no at that point, because he knew that I was capable of giving the gift, and I trusted him and knew he was deeply committed to the program. I was genuinely excited and frankly honored to be part of his vision.”

This raises a new set of questions, including, how does an advancement office catalog the relationships that deans, faculty members, coaches, prominent alumni and others have formed with potential supporters? What steps should the advancement office take to build the trust and communication channels necessary to gaining access to information about those close relationships and connections?

Regarding the inclination data points we assessed in the survey, a fundraiser may be interested in whether the prospect is a “donor to other organizations” and a “recipient of financial aid/scholarships” because they’re trying to ascertain the innate generosity of the prospect, as well as whether the prospect was a recipient of generosity or aid themselves. Does generosity beget generosity? This question has been raised and studied before. One study by Jonathan Meer and Harvey S. Rosen found that just because an individual had a scholarship or an on-campus job does not mean they’re more likely to become a donor as an alumnus. However, we found a recurring theme in the donor testimonials on most college and university websites where the donor specifically highlights how important receiving financial aid was in that donor’s decision to give later in life. We plan to explore this topic further in future research.

The Future of Prospect Reports and Profiles

So, how can prospect research professionals improve the delivery of the data to the front-line gift officers and others responsible for cultivating and soliciting prospects? One area where advancement staff potentially can improve efficiency is the preparation of prospect reports, an especially timely focus in light of the faltering feasibility of in-person prospect visits during the pandemic.

In an attempt to be helpful and thorough, prospect research staff often write long, prose reports on prospective donors. Fundraisers find themselves reading a lot of text just to pull out a few essential tidbits. So we wonder—why not create a standard, easy-to-read report form that gives fundraisers just what they need to do their job?

After all, fundraisers, university leaders, and deans are busy people who receive reams of other reports; they shouldn’t have to wade through 3,000 words to understand a prospect’s background. Regarding ROI, it might be revealing to calculate just what each one of these beautifully written treatises costs compared to a standard profile in which important and actionable data points are mostly populated automatically.

In the survey, we also asked: “After first meeting with a prospect, how would you typically describe the accuracy and usefulness of the data you had prior to the meeting?” These are the responses: 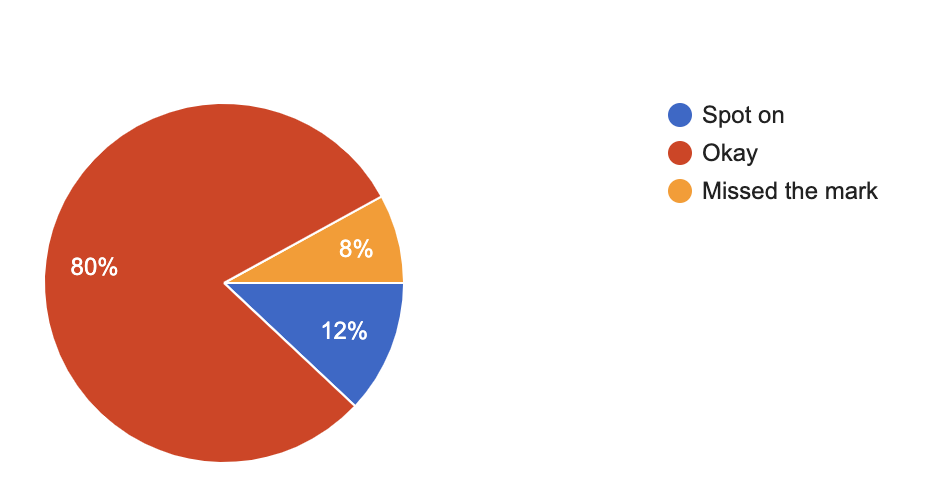 We believe fundraisers should feel better than just okay about the accuracy and usefulness of the data they receive on prospects.

Once advancement teams have agreed upon the appropriate data points to focus on, what do they do with them? How do they use that data to really understand those prospects? This is where looking strategically at different combinations of data points and the possible relationships between them comes in. Big data is good only if you find what’s truly valuable about it. We believe that two, three, or even more pieces of correlated data can be more valuable than a single data point. For example, can you use data to zero in on alumni who all:

> reside in the same wealthy community,
> graduated within a few years of each other, and
> have high-school-age children who are considering where to attend college?

Is your institution or organization working to leverage big data or data analytics to engage donors and alumni in innovative ways? Tell us about it! We’d love to amplify your work.

At Affinaquest, we can provide your institution with up-to-date, accurate contact data and data analytics, but that’s just the beginning. Through our Data Enrichment and Predictive Analytics solutions, we use proprietary algorithms to ensure that your data is complete and help you identify the best prospects to pursue.

Our team has spent years developing our data enrichment and analtyics algorithms, which are now used by many colleges, universities, and not-for-profit organizations. We want to help you build affinity with your donors through good data. Contact us to schedule a demo or learn how we can help you with your data acquisition and data management needs. 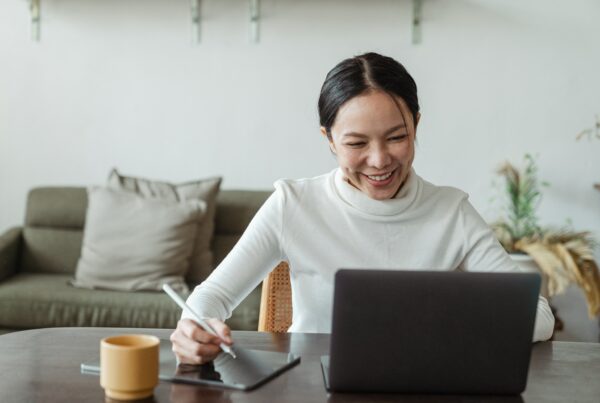 3 Big Takeaways from the 2022 CASE All Districts Online Conference

Thriving in the Ecosystem of Data: A Conversation with Kirsten Reppert of Georgetown University [Part 3] 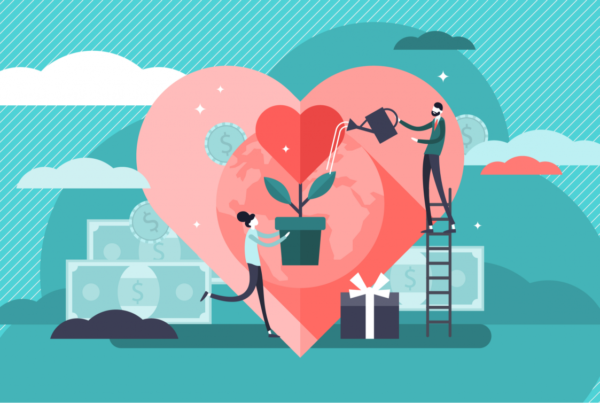 Curious About Becoming a Major Gift Officer? Here’s What You Need to Know (Part 1 of 2)